May 4 (Reuters) – Russia said on Wednesday it had fired two Kalibr cruise missiles at Ukrainian targets from a submarine in the Black Sea and reiterated a warning that it would seek to hit shipments of NATO weapons to Ukraine.

The defense ministry published video footage of the cruise missiles being launched from the Black Sea, and said they had hit unspecified ground targets in Ukraine.

Russia previously said it had mounted similar strikes from a submarine on April 29.

Earlier on Wednesday, Defence Minister Sergei Shoigu reiterated a warning that Russia would seek to destroy convoys of arms shipments to Ukraine from Western countries, which in recent weeks have stepped up these supplies.

“The United States and its NATO allies are continuing to pump weapons into Ukraine,” Shoigu told a conference of defense ministry officials on day 70 of what Russia calls its special military operation in Ukraine.

“We view any transport of the North Atlantic Alliance arriving on the territory of the country with weapons or materials destined to the Ukrainian army as a target to be destroyed.”

Russia’s defense ministry said earlier that it had disabled six railway stations in Ukraine used to supply Ukrainian forces with Western-made weapons in the country’s east by bombing their power supplies.

It was not possible to independently verify the claim, which did not say which Western-made weapons were supplied to Ukrainian forces via those stations. There was no immediate reaction from Kyiv.

Chief of Staff Valery Gerasimov was shown at Shoigu’s side during the meeting of defense officials. On Monday, the United States said it believed Gerasimov visited Ukraine’s eastern Donbas region last week but could not confirm media reports that he was wounded during fighting.

For those unfamiliar with the diesel-electric Kilo, here’s a writeup from “1945”: https://www.19fortyfive.com/2022/05/russia-submarines-kilo-class/

Kilo-Class: What Makes This Russian Submarine So Dangerous?

Russia’s quiet and improved Kilo-class submarines are patrolling the Black Sea, carrying deadly Kalibr cruise missiles that they have used to destroy targets in Ukraine. These subs are conventionally powered. But despite lacking nuclear propulsion, they can sneak around the coast of Ukraine and create mischief without being detected. The Rostov-na-Donu is the most recent submarine of this class to enter the Black Sea. It arrived in the area earlier this year from the Dardanelles, bringing the total of improved Kilo-class boats in the theater of operations to four.

The Russian Navy ordered six of the improved Kilo-class subs (Project 636.3) , which are built at St. Petersburg’s Admiralty Shipyard.

In October 2021, the Magadan became the latest submarine in this class to enter Russian service. Project 636.3 subs are built on the original Kilo-class from the early 1980s. The newer subs are believed to be some of the quietest in the world. So difficult are they to detect that they have earned the nickname “Black Hole.”

That silent quality is a curiosity. The improved Kilo-class still relies on non-nuclear, diesel-electric propulsion. Compare that to the U.S. Navy: America’s last diesel-electric boat retired more than 30 years ago. But a number of features help the improved Kilo-class run silent. The engine plant is placed away from the hull, which eliminates some noise. The vessel also has a rubber-like coating to reduce sound.

The Project 636.3 boats are 243 feet long and displace 3,900 tons. They have a small crew of 52 sailors. The subs can cruise at a depth of 787 feet, with a maximum depth of 984 feet, and they have a range of 7,500 miles. A considerable shortcoming is that they can only sail for 45 days before they need to be resupplied.

These are attack submarines. Their purpose is to eliminate enemy subs and destroy surface ships. Their cruise missiles also give them land-attack capabilities. And since they are so quiet, they can also patrol close to shore and collect reconnaissance and intelligence data.

The new Kilo subs are improved in other ways. They have enhanced internal navigation, a modern fire control system, and better torpedoes. The subs can only steam 10 to 20 knots with two diesel engines. Each submarine carries six torpedo tubes with 18 torpedoes. These same tubes can launch the Kalibr.

The 636.3 subs have been exported to China, Vietnam, and Algeria. This is an interesting mix of clients. China and Vietnam are maritime rivals, with competing claims to islands in the South China Sea. This means the Kilo boats might try to track each other in that area of operations. 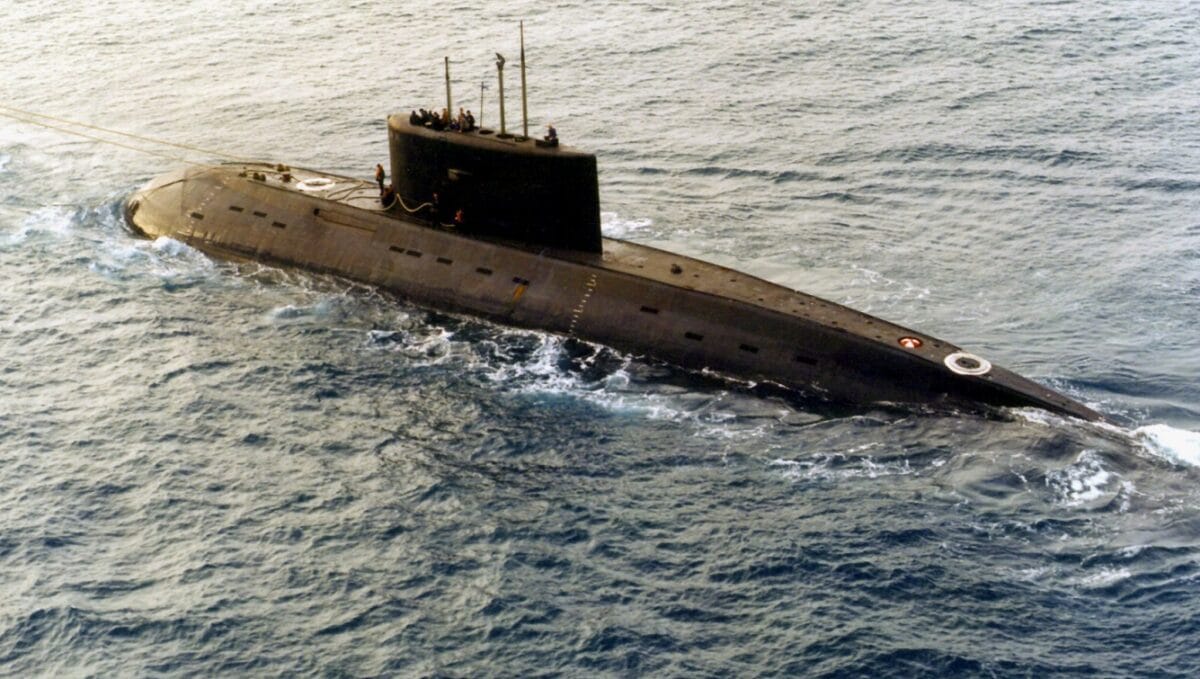 A Russian-built, Kilo-class diesel submarine recently purchased by Iran, is towed by a support vessel in this photograph taken in the central Mediterranean Sea during the week of December 23. The submarine and the support ship arrived at Port Said, Egypt, on Tuesday and were expected to begin transiting the Suez Canal today, Jan. 2, 1996. Ships and aircraft from the U.S. NavyÕs Sixth Fleet are tracking the submarine, which has been making the transit on the surface. This is the third Kilo-class submarine the Iranians have purchased from Moscow. DoD photo 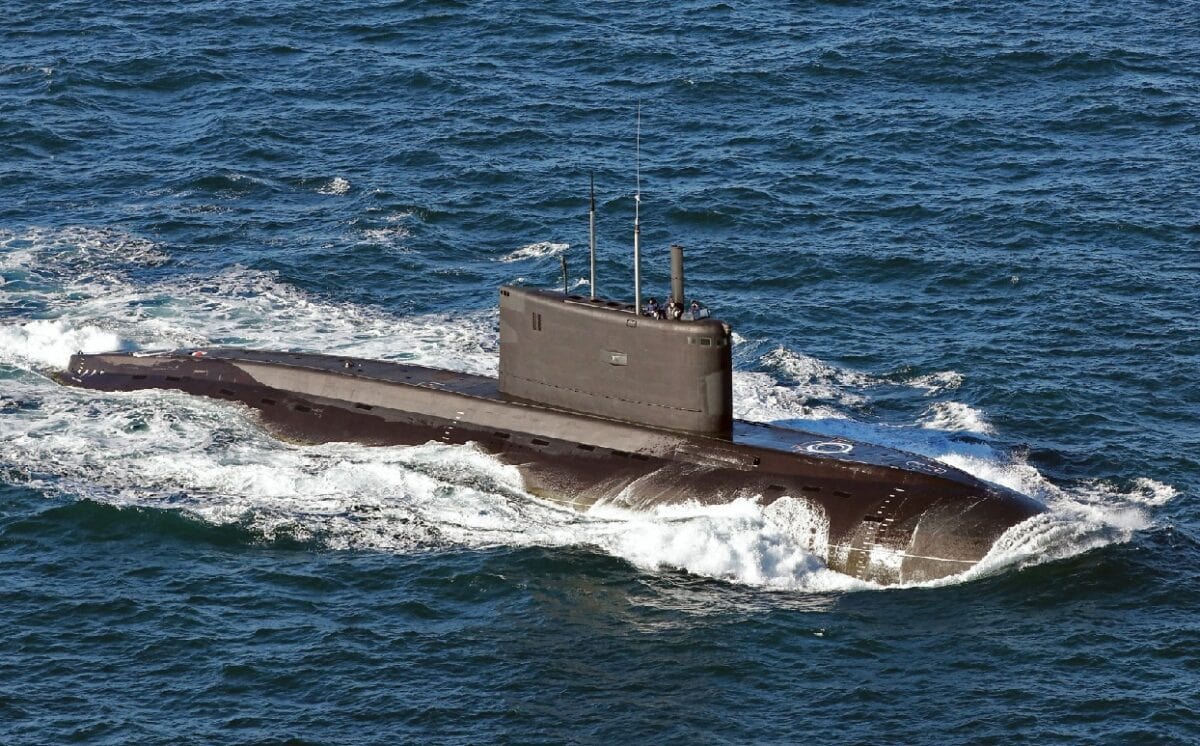 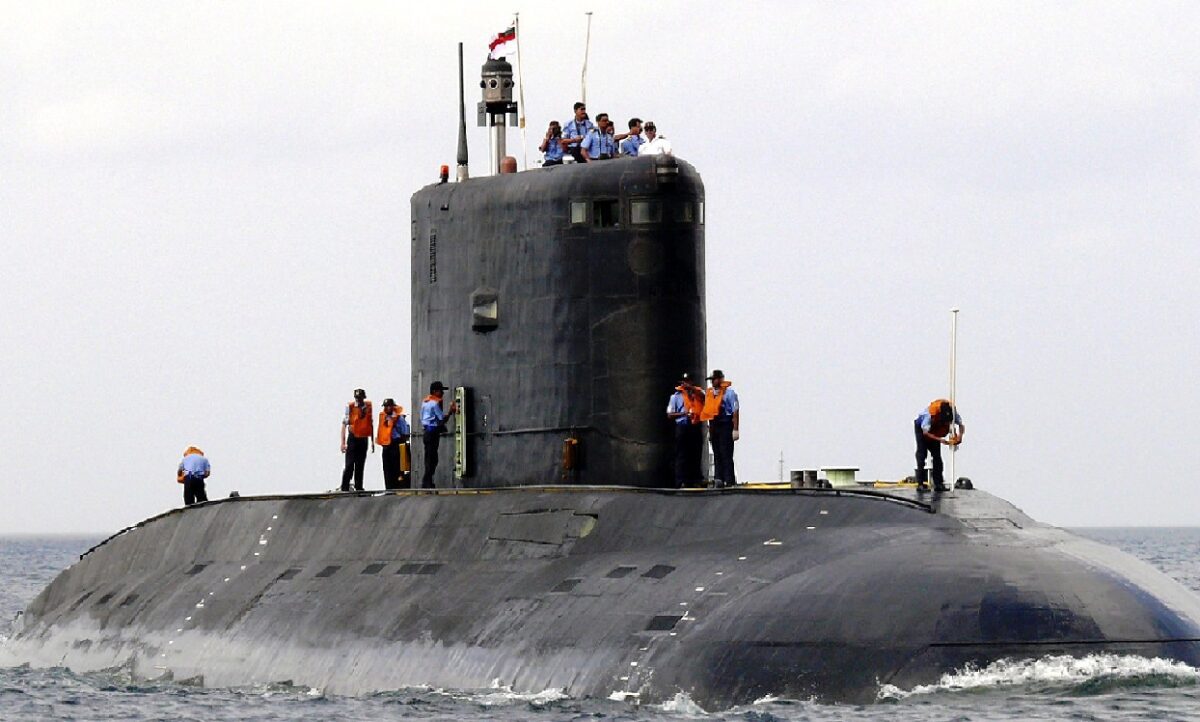 The Kilo has served the Russians well over the years, and exports of the boats have been successful. But they do have weaknesses. They are small, and they do not carry many torpedoes. They are also slow, and they cannot stay out to sea very long compared to nuclear-powered boats. But they are some of the world’s quietest submarines. Expect them to continue to play a land-attack role in the Black Sea, launching Kalibr cruise missiles while submerged. There is nothing Ukraine can do to stop them.